The Bake Off cast

If you’ve ever asked a British person what their favourite TV programme is, they might have said The Great British Bake Off. But what is this show? And why is everybody talking about it?

The Great British Bake Off, also known as ‘Bake Off’ and ‘GBBO’, is a reality TV show in which members of the public compete to bake the best cakes, biscuits and bread. The judges are expert chefs, and two comedians present the show. Every week one contestant is eliminated, until only the final three remain. These top three bakers compete in the Final, and at the end the best baker is crowned winner of the Great British Bake Off. It’s a very simple idea, but has proved hugely successful. In 2016, 14 million British people tuned in to watch the Final!

The very first series was broadcast in 2010. It featured ten bakers, with just six episodes (two people were eliminated every week.) The judges were bread expert Paul Hollywood and famous baker Mary Berry, and the show was presented by the female comedy double-act Mel and Sue. Every week, the bakers were given difficult tasks such as making large, elaborate cakes, and dealing with unfamiliar recipes. The cooking happened in a big white tent, which travelled to a different location in the UK every week. The presenters also visited famous places in the local area and talked to experts about the history of baking.

The first series was a big success, so in the second series the number of contestants increased to twelve, and the number of episodes increased to eight. The show also happened in one fixed location instead of travelling around. Since then, the show has continued to grow in popularity, and is now in its ninth series. It is unusual because although it is a cooking show (traditionally popular with older people), large numbers of young people watch it every week. Indeed, many people have copied the Bake Off and held their own baking competitions in their offices and local communities. The current series has now reached the halfway point (only seven bakers remain), and everyone is wondering who is going to win. Could it be Rahul? Kim Joy? Or Bryony? Recent challenges have included making the painter Claude Monet’s favourite cake, which is green and contains spinach, and making a ‘biscuit chandelier’ which hangs from the ceiling.

Viewers enjoy the conversations as well as the cakes

Highs and Lows of the Bake Off

People often say that they like the Bake Off because it is a relaxing family show in which they can enjoy watching a group of friendly people making delicious cakes. However, in the eight years the Bake Off has been running, there has also been plenty of drama!

Series five saw a very dramatic episode, in which the contestants were asked to make a Baked Alaska. This is a difficult cake to make because it has ice cream in the middle and hot meringue on the outside which needs to be baked in the oven. One of the contestants, a young man named Ian, got very angry when he found that someone had removed his ice cream from the freezer. Another contestant, an elderly woman named Diana, said she had removed it by mistake. Ian’s ice cream melted and he was so upset that he threw the ruined cake in the rubbish bin. As a result, the judges eliminated him and he lost the competition. People watching the episode on TV were very angry with Diana, because it looked like she had caused Ian to lose the competition. Lots of people wrote angry messages on Twitter, and many newspapers wrote articles about it. Diana was extremely upset because she felt that the BBC had edited the episode in a way that wasn’t true – she said she only removed the cake from the freezer for 40 seconds, but on camera, it looked like much longer. She said the BBC changed the story and as a result, the public thought she was a horrible person. She left the series after becoming ill. The story received a lot of media attention and people realised that the Bake Off had become a very big event in the UK. Everyone was talking about it and the contestants had become celebrities. The incident of the Baked Alaska was nicknamed ‘Baked Alaska Gate’ after the US president Richard Nixon’s political scandal, Watergate, in the 1970s. 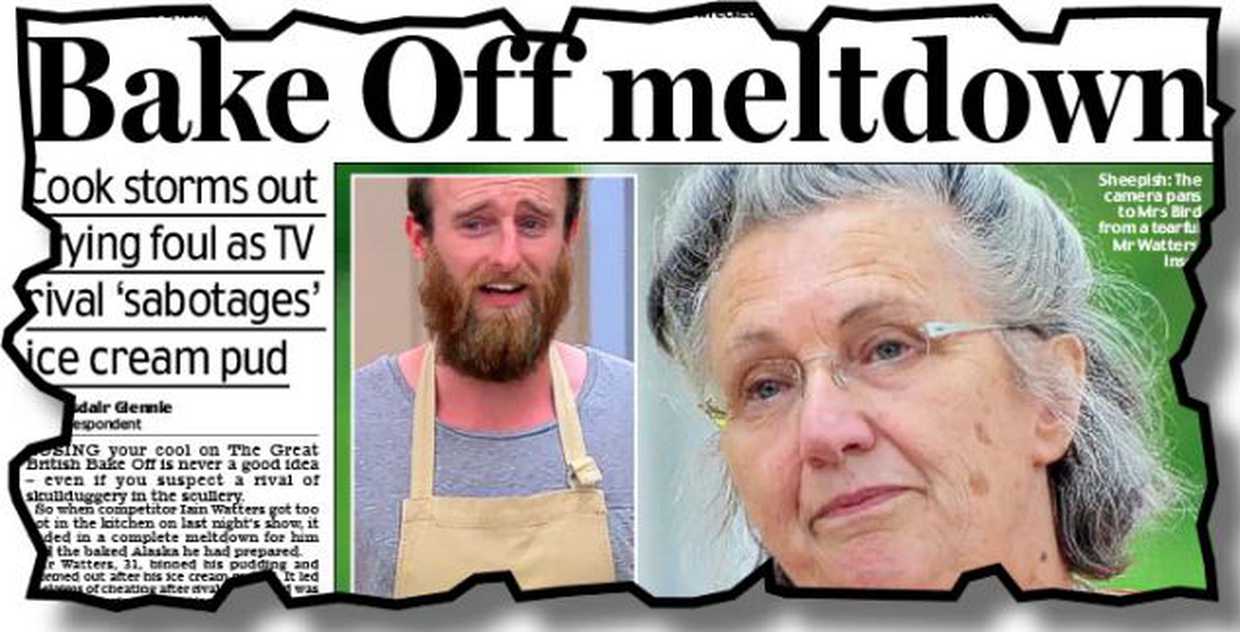 You can read more about ‘Alaska Gate’ here, in the Daily Mail (The Daily Mail is a British tabloid newspaper, famous for its emotive and gossip-style stories.)

The next big scandal was the decision by the show’s producers to move the Bake Off from the BBC to a commercial TV channel, Channel 4. The BBC did not own the show, it was owned by an international production company called Love Productions, and the producers realised they could make more money by selling Bake Off to Channel 4. The show’s presenters, Mel and Sue, and judge Mary Berry all refused to move to Channel 4 and left the series – causing a lot of sadness to the show’s millions of fans. However, Paul Hollywood stayed, and two new comedians were selected to present the programme: Noel Fielding, who is well-known for his surreal comedy ‘The Mighty Boosh’, and female comedian Sandi Toksvig. Famous cook Prue Leith joined Paul Hollywood to act as a second judge on the show.

While many fans were sad that the show had to leave the BBC, the viewing figures have remained high, at over five million per episode. Why not watch an episode next Tuesday night and see what all the fuss is about?

This blog post was written by Harriet, one of our trainers at The London School of English